The Illustration Friday prompt this week is: moon. My first thought was the cow jumps over the moon. I love drawing cows and I make children's books, so it's an obvious fit. However, I've drawn lots of cows jumping over the moon over the years.* So, this time I decided to give the cow a rocket ship to fly over the moon! 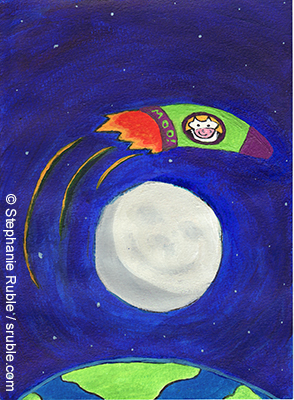 It originally was going to be an ink drawing with digital color. Then I decided to play with watercolor crayons, which was fun, but not quite right. That was when the acrylic paints came out to add a final layer over the watercolor crayon. It scanned so much darker than the original! This is my first cow painting of the year! (I've also done another non-cow painting this year.)

* Artists sometimes have themes or subjects that they keep coming back to. Cows are a particular favorite of mine (I still like drawing/painting them, even after I drew a cow a day for a year). There's also something I'm drawn to about the idea of a cow jumping over the moon, so I continue to revisit that subject (as well as pictures of cows at night with the moon in the background, even if they aren't jumping over it). Here are a few other images I've created in the past of cows jumping over the moon (only a few - there are more!): 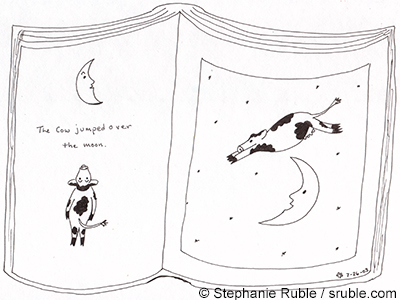 2005 - Super Cow (I was thinking about how it was possible for a cow to jump over the moon - clearly the cow needed to have super powers): 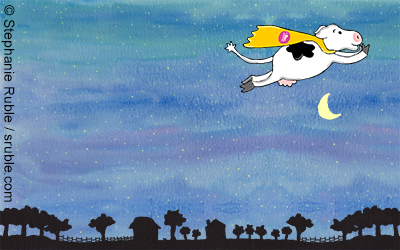 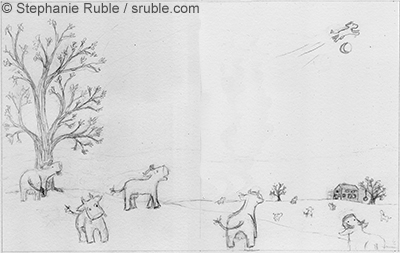 2011 - Cow Jumps Over The Earth (I was thinking about the nursery rhyme again, and how it would be possible for a cow to jump over the moon. I decided to have the cow jumping ON the moon, and therefore, it would be jumping over the Earth.) What subjects or themes do you return to in your writing or art?

Recent Reads: After my last post about my 2015 book stats, I wanted to talk more about the books I'm reading and loving, or ones I've read in the recent past that I love** (so many good books to talk about). Note: Recent = books read the day of, the week before, or within the last year or so, but usually that month.

Currently Reading -  DEAR GENIUS, The Letters Of Ursula Nordstrom, collected and edited by Leonard S. Marcus: a fascinating look at one of the great editors of children's books, who helped to shape the books kids read, and who edited many of the books and authors/illustrators that are still read today. 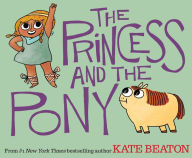 Recent Reads I loved -
Picture Book: THE PRINCESS AND THE PONY by Kate Beaton - A story about a princess who wants a horse to help her do battle in her kingdom of warriors. She gets a tiny round pony instead. It's not easy to get a gift you don't want, but then again, maybe the gift pony will surprise you.

Middle Grade: SHADOWS OF SHERWOOD by Kekla Magoon - A fun new take on the Robin Hood story, with a wonderful girl named Robyn who must learn quickly how to survive on her own, figure out who are friends vs. foes, help the people of Sherwood survive, and piece together clues left by her parents. This is the start of a new series and I can't wait for the next book! I've never been a Robin Hood fan, but that's because I hadn't met the right Robyn yet.

SERPENTINE by Cindy Pon - This is another story set in Ciny Pon's world of Xia. (Note: you don't have to read her first two books to enjoy this one, but you might want to after reading Serpentine.) Skybright is a handmaid and companion to a girl in a wealthy family. They're both growing up and testing the bond they have together, at the same time that Skybright learns that she's not who she thinks she is. A story full of demons, secrets, and the possibility of love. It's also the start of a new series. Can't wait for the next book!
Young Adult:

** Unless stated otherwise, all books were purchased by me, given to me as gifts by family or friends (not the authors or illustrators), or checked out of the library.