bears wearing pants (in an amusement park), plus illustration friday

The Illustration Friday prompt this week is: childhood*. I woke up today with a song** in my head about bears. The lyrics looping around in my mind all day were: "Bears wearing pants. Pants in the amusement park. BEARS!" I did a quick sketch of bears wearing pants at an amusement park, then inked and colored it, which wasn't as quick as the sketch. Here's the final color piece: 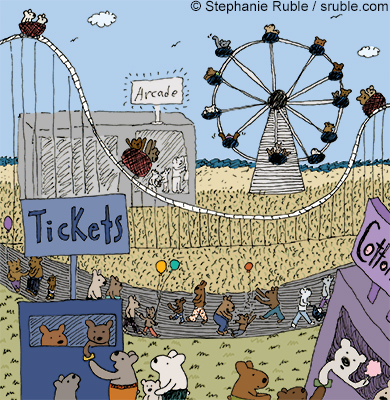 Just for fun (mostly because I like to see process pictures from other artists) here's the black and white version of the bears wearing pants at the amusement park: 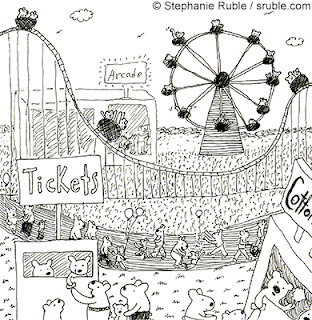 When I was a little kid, there were local fairs and the State Fair. They all had rides, games, and cotton candy. I remember waiting for the State Fair all year long, and being excited when a local fair would pop up. I also remember being too short to ride the rides year after year, and then finally being tall enough.

Do you remember when you were too small to ride the rides?

I also remember the time we went on the big roller coaster (I think it was actually my first time on a roller coaster). My mom and I were sitting in the front car and my dad and brother were in the car behind us. Unfortunately, we weren't able to get pull down the bar that goes across your lap and keeps you from falling out of the roller coaster. We yelled for help, but they ignored us and started the ride. We kept yelling, and my dad and brother started yelling too. Pretty soon everyone was yelling and they finally stopped the ride as it was going up the first hill. They came and fixed our car and re-started the ride like it was no big deal. Which, since they fixed it, it wasn't a big deal. But if they hadn't ...

My favorite part of this image is of the two bears at the top of the hill, about to go down. It reminds me of my mom and me. Here's a closeup: 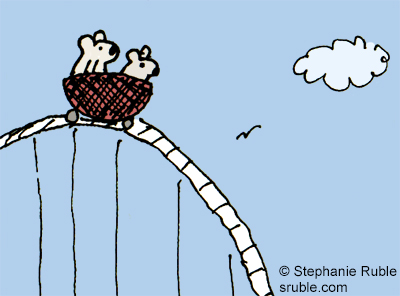 None of the fairs we went to were at a beach, and were only up for a short time each year. I thought the beach would be a good place for the bears to go ride rides and play games all year round. It's a bears only beach, except for an occasional bunny. Do you see the bunny in the first picture above, or in the closeup below? (Hint: the bunny is in a car with two bears at the bottom of the Ferris wheel.) 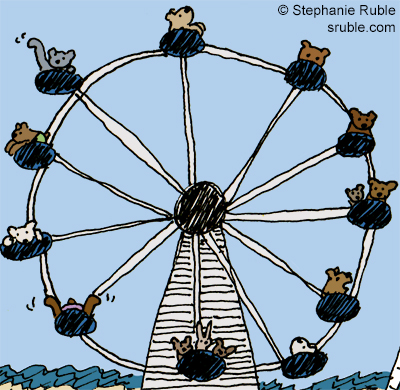 What started out as a weird song in my head when I woke up this morning turned into a fun day of art making. Guess I should pay more attention to what I'm thinking and singing when I wake up!

Do you ever get inspired by songs or thoughts in your head when you wake up?

* I actually did a different piece of art for this prompt, but now I'm saving it to post another day.

** Pretty sure my bear song isn't a real song (though if it is, please let me know). Also don't remember have a dream about bears, wearing pants or not, or at an amusement park or not. Not sure where this came from, but I had a fun day working on art for my bear song.